Sorry for the hiatus, it’s been a busy month of settling into our new home, chasing around a toddler, and doing tons of design work. But this weekend I decided to take a day to myself, at the VRLA convention in Los Angeles, CA.

Let me preface this article with the statement that while I’ve lived in Southern California for most of my life, I’ve only been in Los Angeles (Hollywood, specifically) for about 3 months. I decided to take some time, learn the highly underrated Los Angeles Metro rail system, and enjoy a relaxing day of discovering what is on the horizon in terms of virtual reality entertainment. 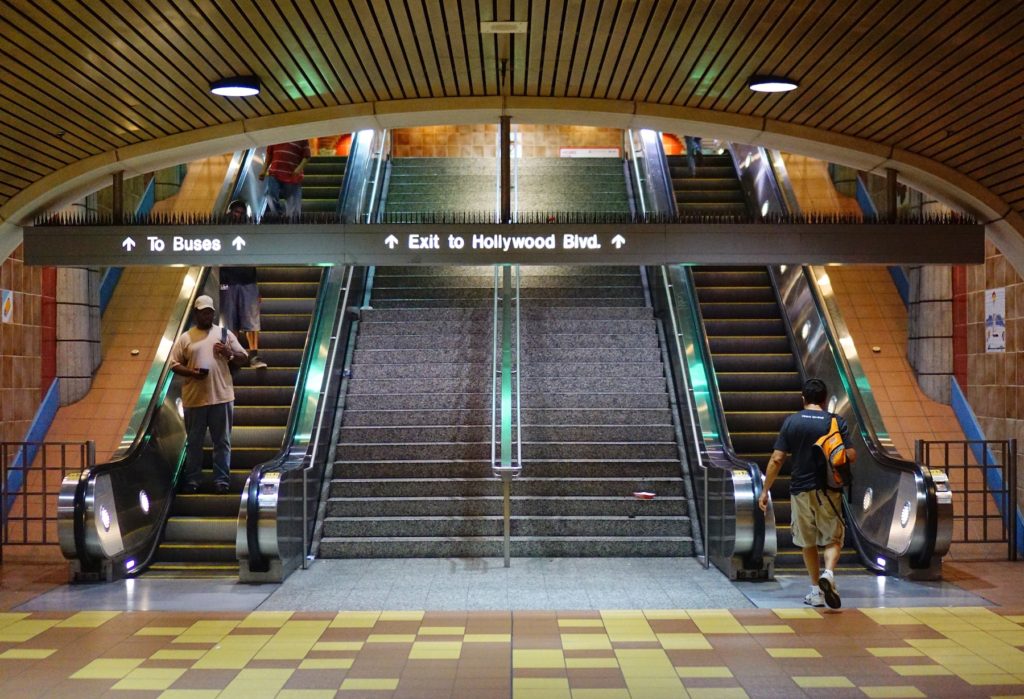 After my final train dropped me off a few hundred feet from the Los Angeles Convention Center at 11am, I strolled up to an empty check-in both (I actually had two helpful attendants pseudo-battle over the right to append my access wristband). 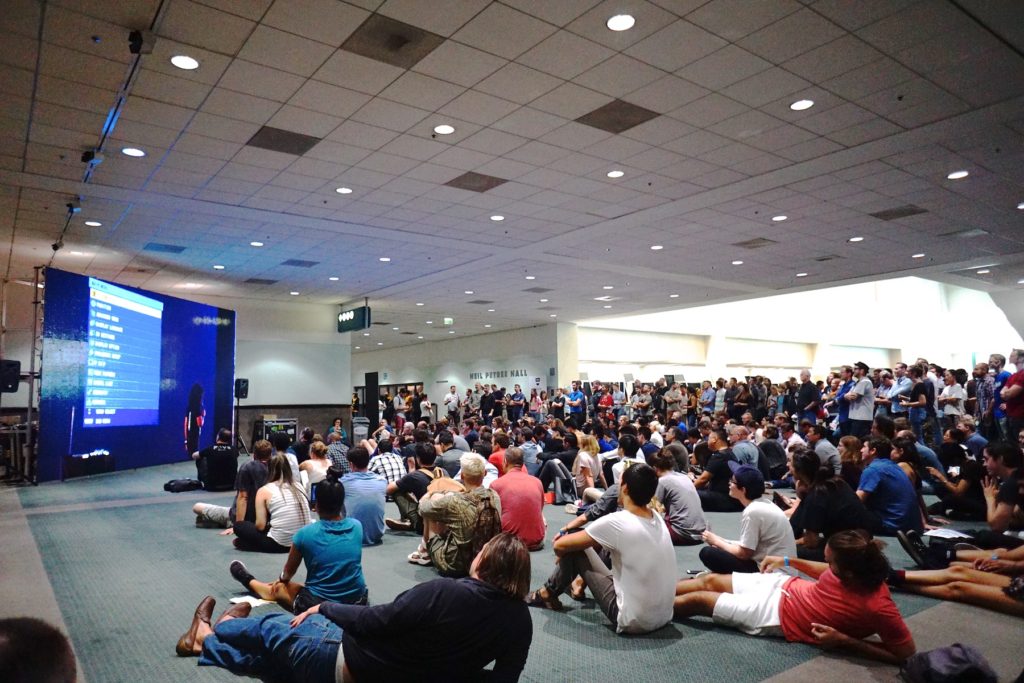 I was a few minutes late for the keynote address from the insanely talented Reggie Watts, but the VRLA team was prepared with a large screen in the holding area that projected the talk in real time to those who didn’t make it into the hall. I was excited. Reggie Watts was nailing geeky jokes, freestyle rapping about tech and motion sickness, and actually providing some insight and vision about the direction of the industry. As Reggie was winding down, I couldn’t take my eyes off an egg-shaped booth that promised a free 3D scan of your head, that would be emailed to you for use in any application you would like (the company sold custom figures of yourself in all kinds of bodies, from astronauts to knights). I jumped in line at about 11:30 – still watching the end of the keynote. 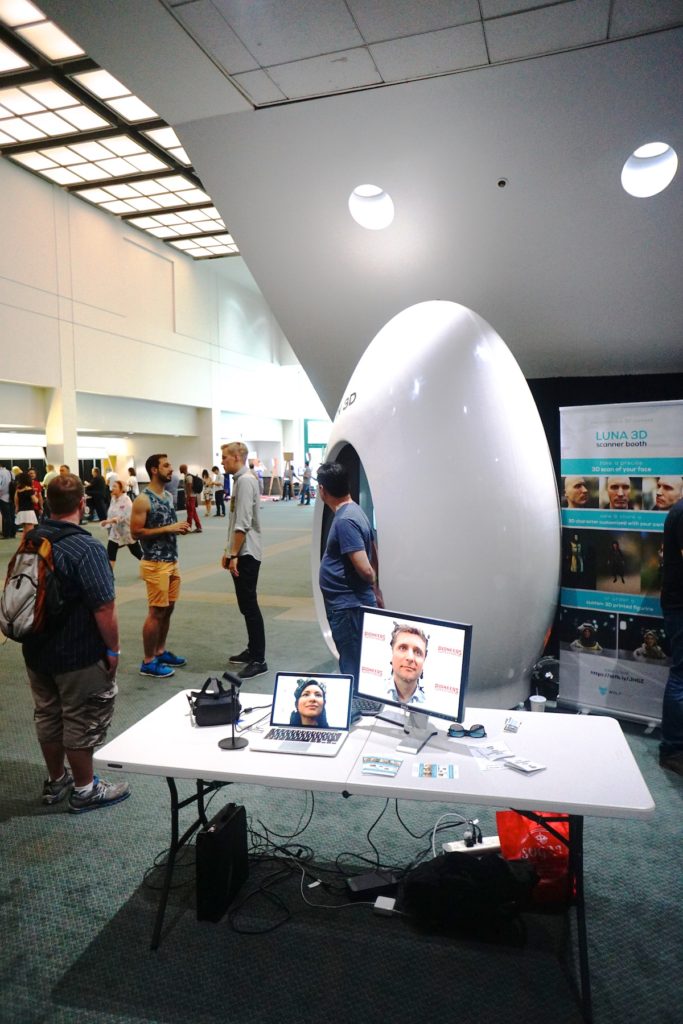 Thirty minutes later, and 40% battery depleted, the expo floor was opened – apparently there was a massive line that had formed to get in first to the hall while I was enjoying Mr. Watts finish.

I had a decision to make: bail on my 30 minute wait and join the mass of attendees corralling into the expo hall, or stick to my original plan and get this 3D scan so I can someday hand down a now-creepy action figure to my son of his dad’s face as an astronaut.

I need to be an astronaut.

It was about 12:25 by the time I completed my scan, put in my email and scurried to the expo hall. 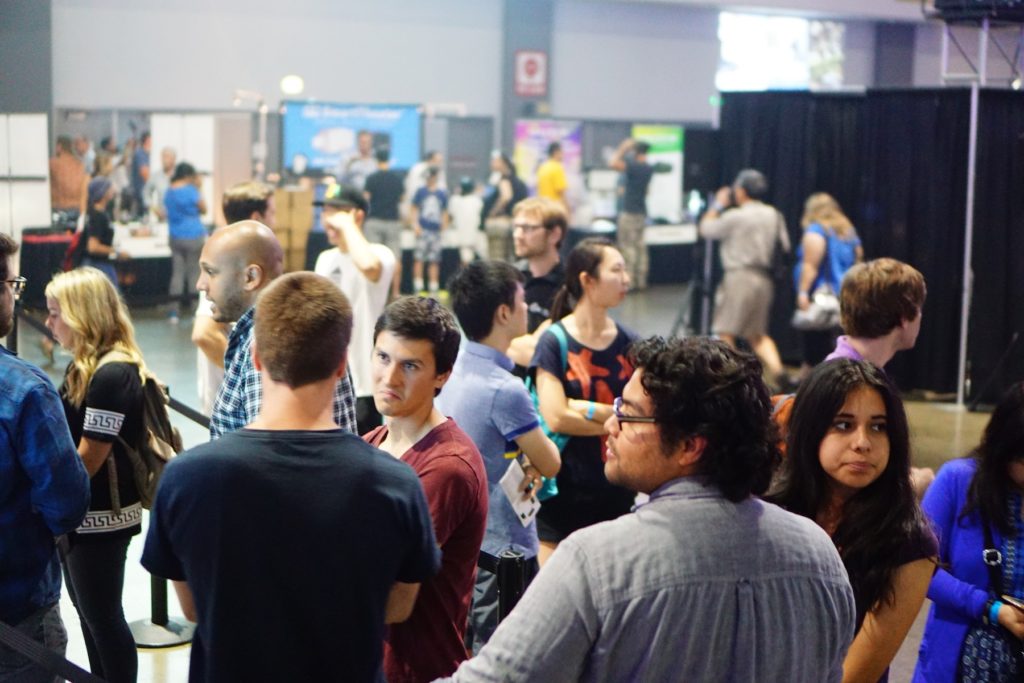 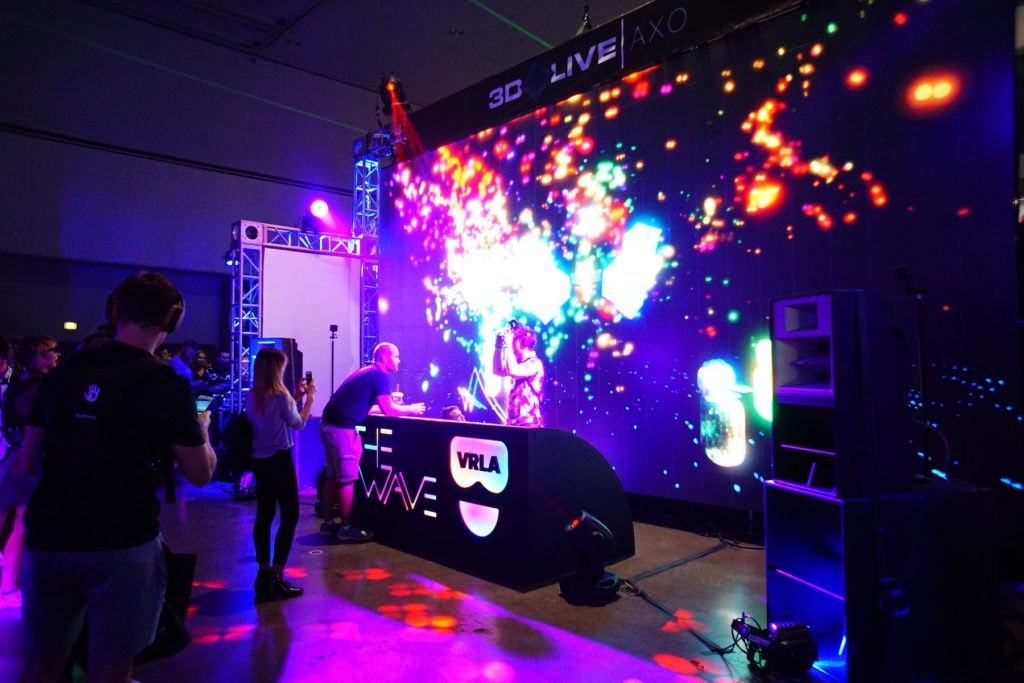 No joke, it was nearly 4pm before I put on my first headset. And I was actually still in my first line when I saw an opening at a nearby booth and seized the opportunity. I have to thank my line partner David for holding my place.

Granted, it was marvelous. I was put into a time travel machine and was able to use all sorts of weapons from different eras. It ran on the HTC Vive system and blew me away with the seamless quality of the experience. 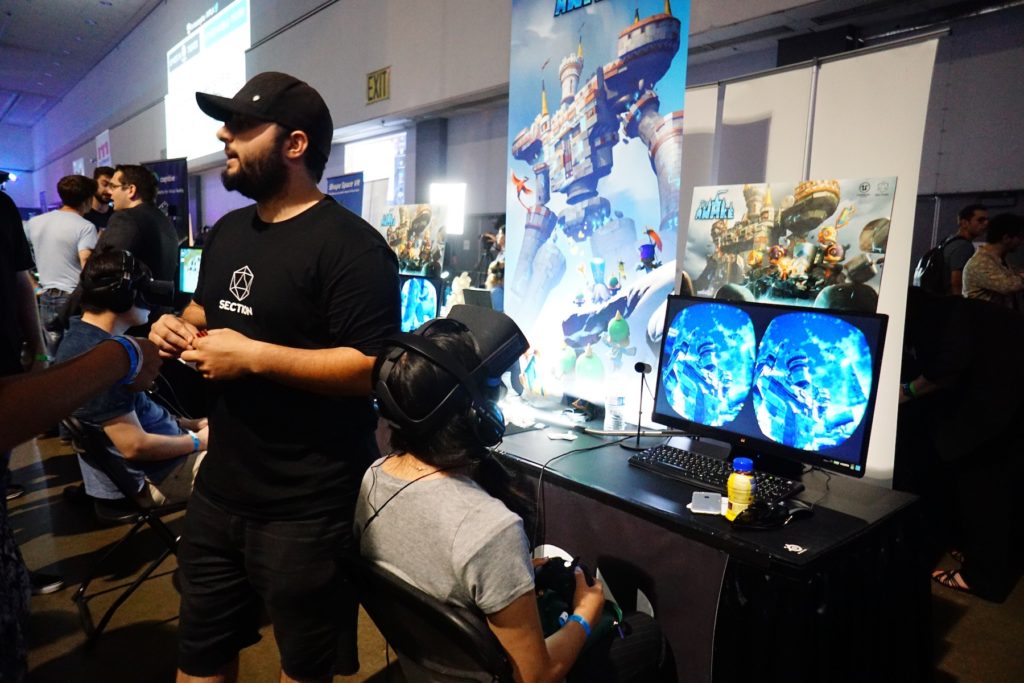 I must note that I wandered around for about 30 minutes before deciding on the line I was going to wait in first. Ultimately, it was a large, open game that housed a Western-era shooting simulation, but also used motion tracking for two players to bunker down and compete for a high score. Overhearing sales pitch after sales pitch in my 3 and a half hour wait, I learned that the VR and tracking system is sold to arcades all over the world for about $150,000. The company also provides software titles (the “western shootout” was just one of several) on license. 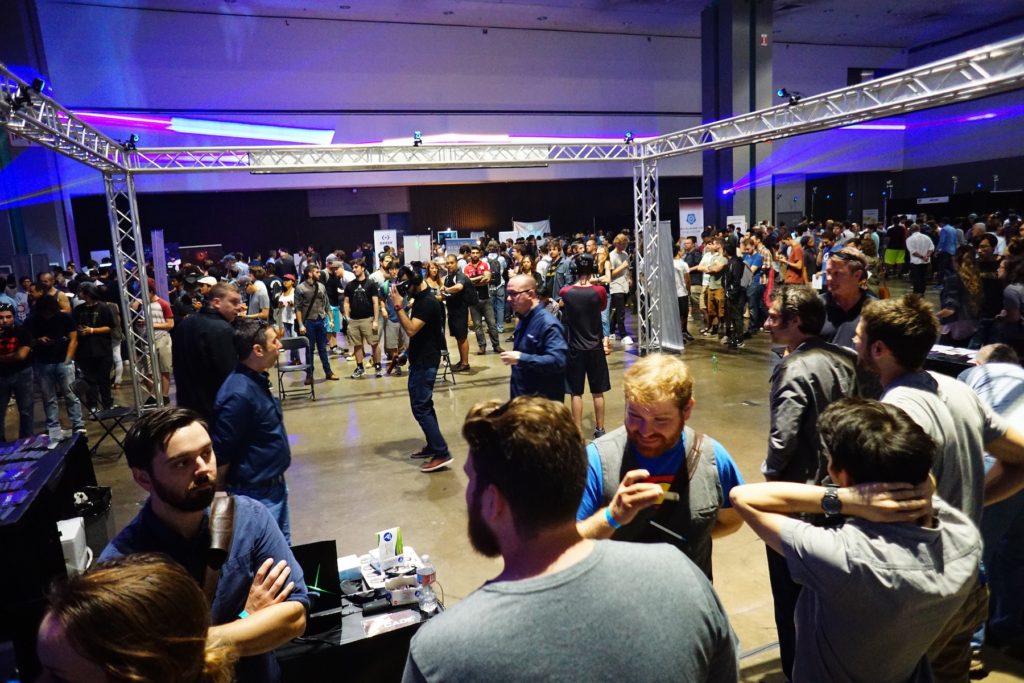 It was after about the third overheard pitch, an hour and a half in line and almost zero movement that I realized something didn’t add up. Each experience allowed two players to compete for 2 and a half minutes, with about a minute and a half (on average) transition. There were about 50 people in line in front of me when I jumped in, so I allocated a little over an hour and a half to get close to the front. That’s insane, even for Disneyland, but I accepted it because it didn’t look much better at any of the other large booths. 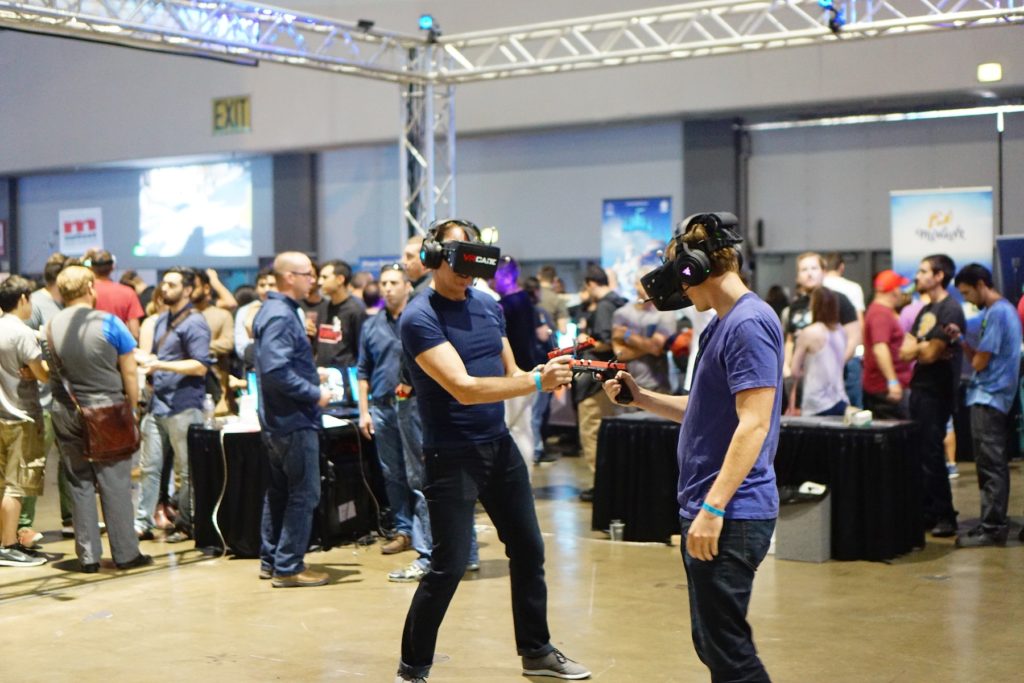 There were two problems though. First, the convention was sold to enthusiasts (there was an industry-only session the day before), but most vendors seemed to be looking over the heads of fans and media for suit jackets and cuff links. Second, there were too many people and not enough vendor employees to logistically handle the lines and (lack of) order. 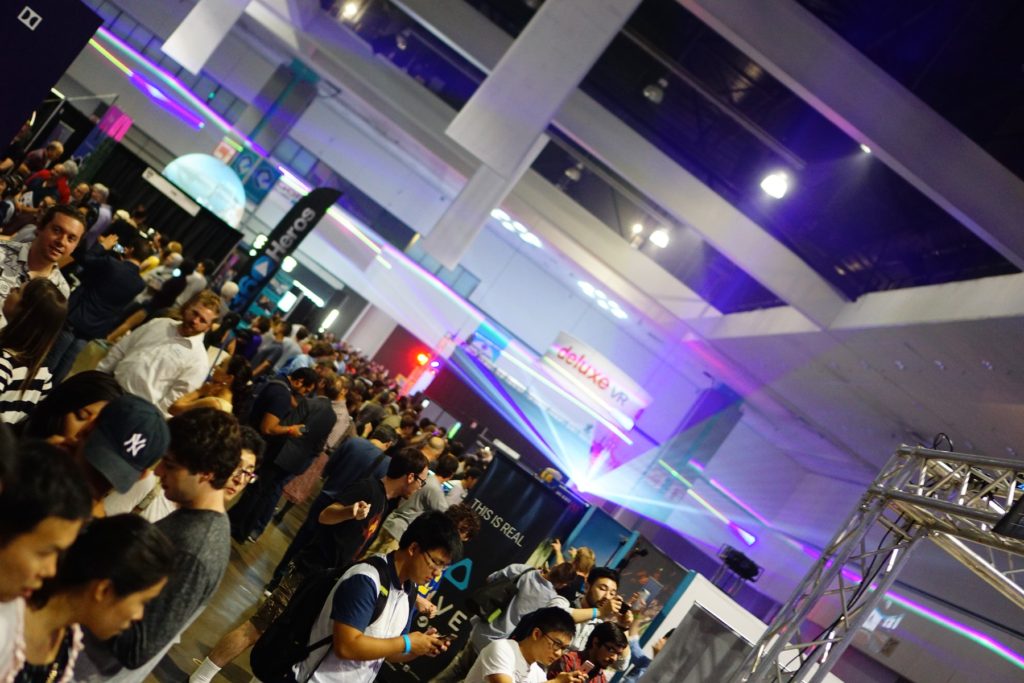 Lines became crowds, ambiguous entrances and oblivious attendees/vendors allowed for constant line-cutting and opportunists to take advantage. At the completion of my third hour in my first line – and just after I was able to experience the miraculous time travel game, I finally decided to politely inform the guys working the “western” booth that the last three pairs of players had bypassed the line entirely and played. Three or four frustrated attendees echoed my observation with increasing angst. Perhaps it was the unacceptable wait, but the response I got of “Look, we’re here to sell business” from the employee just sat like a brick in my stomach even after my turn.

I understand. You have a business, and you sell your product to other businesses. By itself, that is totally understandable. But when potential second-level customers at a consumer-facing day of a convention end up punished without regard to their experience because they followed the rules and waited in line, it ends up hurting everyone. 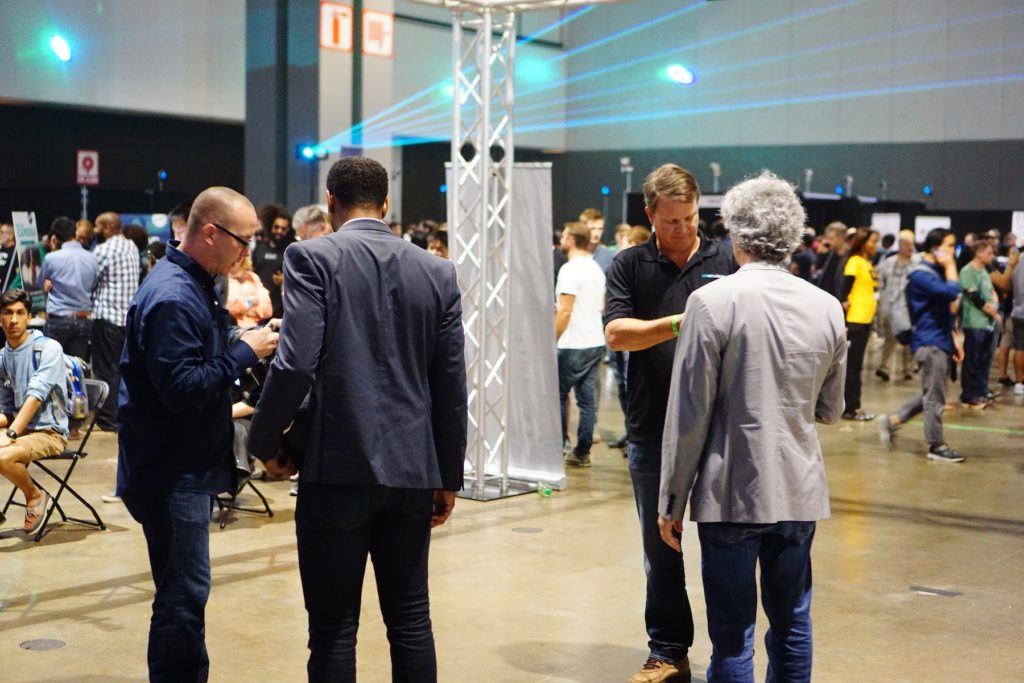 What I came away from this day was that virtual reality is awesome, and the technology is here. But it’s still not quite ready for prime time. It doesn’t know what it wants to be, especially with inclusivity. I enjoyed my experiences, but the work to actually experience them was more than it was worth in this setting. I did leave about an hour and a half before the convention shut down, which could have allowed me one or potentially two more experiences, but the massive lines had not decreased and most of them now had attendees sitting in line because of lack of movement. 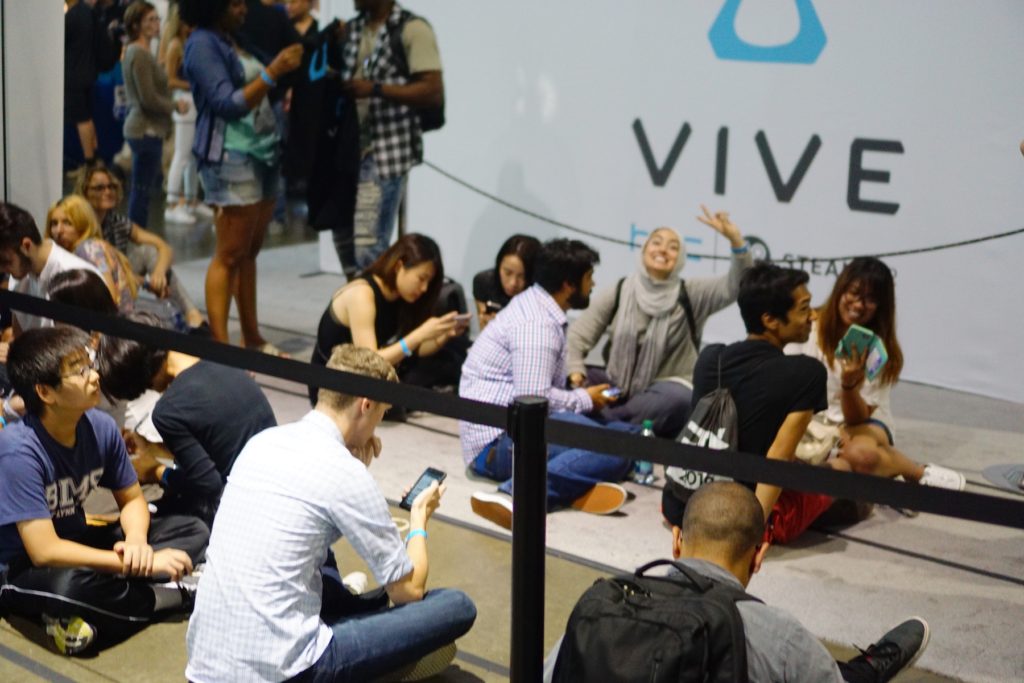 For disclosure, I purchased the single-day consumer ticket to the convention for $39. This was much less than the industry-only two-day ticket for $299, which provided access to the industry-only day. I should also emphasize that most of my frustrations stem from the nature of an emerging technology and the businesses that spring up first. VRLA put together an impressive event, and everything from the ticketing and check in to the handling of the keynote address overflow was handled without issue.

Oh and by the way, as of Wednesday (4 days after the convention), I still don’t have my friggin’ 3D face scan to order my personal astronaut figurine.

Visiting Beefeater: The Home of Gin in London

A Night in Gloucestershire & a Day in the Cotswolds, England